Stories from the road. 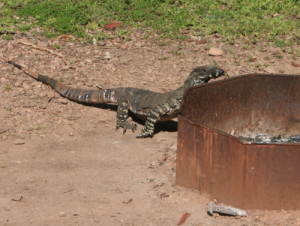 they sometimes leave tasty morsels behind.

This goanna decided to have a look in last nights cooking fire pit, this one is about 1.5m long (5 feet) which is not as big as some I've seen but a good size.

It's always worth a quick look in their cooking places, as long as it's not still hot.

Sometimes, if it's still hot or they are the wrong sort of people, the tasty morsel is the one that just climbed into the cooking pit.

But not this time.  Nothing to eat though so moving on. 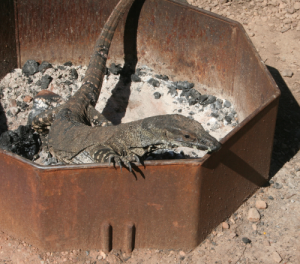 Yes, this is a slight digression to the type of posts you are likely to read here, but I figure that those of you who have never been to Australia and may never get the chance would like to see a bit of the country as we move around.

To that end, I'll put some photos up here for your enjoyment.

If you don't want to see them, let me know.  I may or may not pay attention to that. 😁

To slightly more serious matters, there is a very common saying in Australia, "she'll be right".  It goes some way to understanding the Australian psyche and the apparent lack of motivation.

I say apparent, because there is plenty of motivation and definitely a willingness to work hard to achieve a goal, it often just very well hidden in a laid-back mannerism.

It also shows that we expect things to work out for the better regardless of what is happening around us at the time.

They don't always of course, but the expectation is always there.

It's a good attitude to have towards your business and life in general, having a positive attitude and expecting things to work out just fine takes a lot of the stress away.

How do you go about developing this attitude if you weren't fortunate enough to be born in Australia?

Some people find that meditation helps, others have embraced the concept of mindfulness.

I'll find some good resources for you in the next couple of days and add them to this post but right now I'm running low on battery charge.

I suspect that some of my laid-back attitude comes from going through some pretty traumatic events, coming out the other side with little to no long term effects, that I can tell.

I was in Darwin in 1974 for the biggest cyclone to ever hit that city, I've been fired from 5 jobs, I've been through a divorce, I have had three different businesses of which 2 failed.  I have also managed to do serious damage to my left hand which has left me with two fingers slightly misshapen, but they don't stop me doing what I want to do.

I've had cars and motorcycles break down at inopportune times and been very close to bankruptcy.

Despite that litany of disasters and failures I still smile, tell bad jokes and generally enjoy life and I still expect everything to work out just fine.  It has so far, I see no reason for that to stop anytime soon.

Not everything has worked out badly.

I'm happily re-married, I have 4 wonderful kids, 4 lovely grandchildren, with another on the way, I managed to save enough through all of that to be able to retire on my terms and we are able to travel when we want.  Not where at the moment but that too will change.

You too can do this, the secret is to not give up and keep expecting good things to happen for you.

Welcome, this is for you.

Get the latest tips in your inbox.

When you fill the form and submit it you'll be getting regular emails relating to recent posts and other things related to making money online. You can unsubscribe whenever you like. In these emails you will be offered things you could buy. Some of these are my products, some I'll get a commission on.